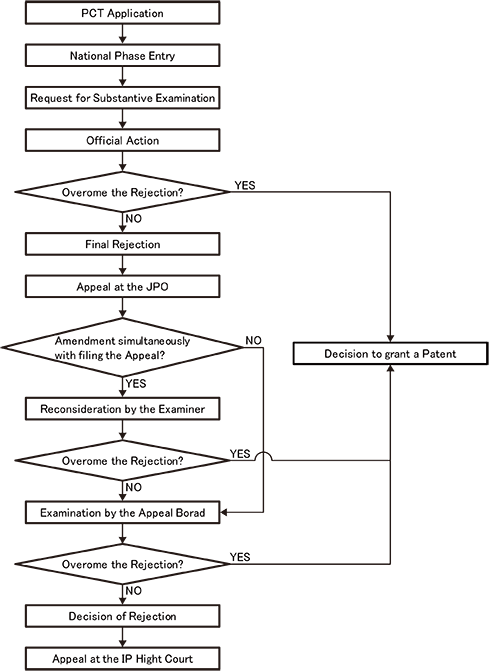 Other Types of Applications

1. Divisional ApplicationA Divisional Application can be filed with the Japan Patent Office at any time before the Official Action from the Examiner is received; however, a divisional application can only be filed after the Official Action is received (i) if an amendment can be filed, (ii) within 4 months after receiving the Final Rejection, or (iii) within 30 days after receiving the Decision to Grant a Patent.

1. Prior Art SearchOur former JPO Examiners can conduct a prior art search of third-party applications and patents that could affect the patentability of the client’s invention. In the event that any prior art is found, three different courses of action can be taken to protect against the third-party patent application or patent rights. These options include filing third-party observations, filing an opposition, and filing for an invalidation trial.

At Sakamoto and Partners when a prior art search is conducted, the former Examiners who conduct the search consult with the firm’s patent attorneys who then work together to determine which publications are most relevant to the client’s case. In the event that a client has conducted a previous prior art search, the former Examiners and the attorneys consider the results of both the search that is conducted at Sakamoto and Partners as well as the results from the client’s previous prior art search when making a relevance determination. This practice ensures that the patent application process runs as smoothly and cost-effectively as possible.

Furthermore, conducting a prior art search in Japan may reveal relevant prior art that was not discovered during a foreign prior art search. These prior art publications can then be utilized to invalidate third-party patents in foreign patent offices.

2. Third-Party ObservationsA third-party opposition is a means to submit a prior art opposition on a pending third-party patent application. This submission allows a filer to assert that the invention lacks novelty or an inventive step and can be based on both patent publications as well as other types of publications. Furthermore, a third-party observation can also be filed on the basis of evidence other than publications such as public use or on the basis of objections to either the claims or the specification.

Moreover, contacting the Examiner in charge of examining the patent application can be very effective when filing a third-party observation.

3. OppositionAfter a patent has been allowed and published in the JPO Patent Gazette, an opposition to the allowed patent can be filed by anyone but only within 6 months from the date of publication of the Gazette. However, grounds for opposition are limited to those with regard to a public interest such as the lack of novelty or an inventive step, the addition of new matter, and objections to the claims.

In the case where the trademark application includes no reasons for rejection, the International Bureau will issue a Statement of Grant of Protection, and the applicant will be required to pay annuities in order to have the application registered. Please note that Rule 34 (3) (a) is applied to a trademark application pending before the Japan Patent Office, i.e. an individual fee payable in two parts.

However, if the trademark application includes reasons for rejection, the Japan Patent Office will issue the Official Action written in English. The applicant will then be required to elect a representative residing in Japan in order to respond to the Official Action.

This means that a trademark, which is identical or similar to other trademarks and belonging to other entities, cannot be registered for the same or similar designated goods or services. Similarity between trademarks will be judged based whether consumers and traders with ordinary attentiveness are able to distinguish the trademark from those belong to other parties. The trademark will be consider in the totality of all it elements including features such as appearance, sound, and concept.

If the applicant fails to respond to the Official Action, the Examiner will issue the Final Rejection.

The trademark right will not be registered unless the registration fee is paid.

12. OppositionAny person can file an opposition within 2 months from the publication in the trademark gazette.